Posted by Ryan on September 29, 2008 and filed under: Customs

Admittedly, I’ve never been a Roth fan. Well actually, I’ve always been a huge fan of Roth’s, just not so much of his cars. In fact, my favorite Roth car ever was one of his daily drivers, not one of his show rods. I guess it’s the style over substance thing that always kind of lost my interest. Many of Roth’s cars were undriveable – art pieces built to look good and go nowhere. That lack of substance just turned me off.

For the last month or so, “Hot Rods By Ed ‘Big Daddy’ Roth” has been sitting in my bathroom as reading material. As such, I’ve been thumbing through it about twice a day and studying all that is Roth. This morning, I decided to figure out which of Roth’s show creations was my favorite. The pick was simple – The Wishbone.

The Wishbone was built in the late 60’s after Roth decided he wanted to prove the viability of the VW powerplant. Newt quickly got to work on a sketch and it wasn’t long before he had something that both Roth and Revell (the paycheck) agreed with. Design in pocket, Roth and Dirty Doug started on the glasswork. By 1970, the car was complete and ready for Revell modeling and the show circuit.

Of course, there was one thing… Roth HATED it. I had always heard that Revell decided they didn’t want to work with the car because of the front suspension being too delicate in plastic. Roth saw this as a year of last wages and took it out on the car. He never wanted to see the damn thing again, so he cut the frame and the body into small pieces and threw the whole lot away.

Of course, Dirty Doug kind of liked the ride and asked Roth if he could have it. Roth agreed, but only on the stipulation that he never put it back together again. Doug had different plans… He traded the car to a guy in Bell, CA for “something silly” according to Roth. That guy then got busy putting the pieces back together. Once complete, he took the car to shows as “Ed Roth’s Wishbone.”

At this point, Roth was really pissed. Here was some guy getting paid to show a car that he had lost so much money himself on. I’m not entirely sure, but I believe Roth threatened lawsuits and black eyes and well, was just generally mean to the guy… Until finally, the Wishbone just kind of faded away.

I believe the car is now sitting in a museum somewhere.

I guess it’s sort of poetic that the one car Roth couldn’t stand is actually my favorite of his show rods. And truthfully, it was before I knew the whole story. 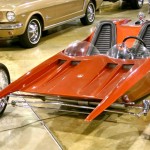