Lew Thompson was just fifteen years old when he and his buddies decided to start the Century Topper Car Club of Modesto, California. A year later, in 1947, Lew got his first hot rod – a 1932 Ford 5w coupe. It was already chopped and had the quarter windows filled, but otherwise was a mostly stock and very clean driver.

Lew drove the car daily throughout high school, but eventually got chin deep into drag racing the little coupe both on the street and at Kingdon Dragstrip near Lodi, California. With that competition came the drive to get fast and local hot rodders like Bobby Meeks were there to help. First, they ran alcohol in the Meeks built flat motor. Then, following Fran Hernandez’s lead, came the nitro… It wasn’t long before Lew and his awkward little coupe was turning 105mph passes in the quarter.

In 1952, Lew decided to give the car a facelift. He dropped a load of parts off at the platers and then queued up Gene Winfield to help with a deep and aggressive channel. Once done, he mixed up some metallic green paint and sprayed the body. The last step was to enter the car into the 1953 Oakland Roadster Show. He took home the top prize in the Competition Coupe category.

Of course, guys like Spencer Murray and Lou Kimsey were at the show as well. They were getting ready to launch a new magazine and together, they were on the hunt for feature cars. Both Al Serpa’s Gene Winfield built ’47 Ford and Lew’s ’32 made the cut and eventually would be featured on what is arguably the first ever cover of Rod & Custom Magazine. 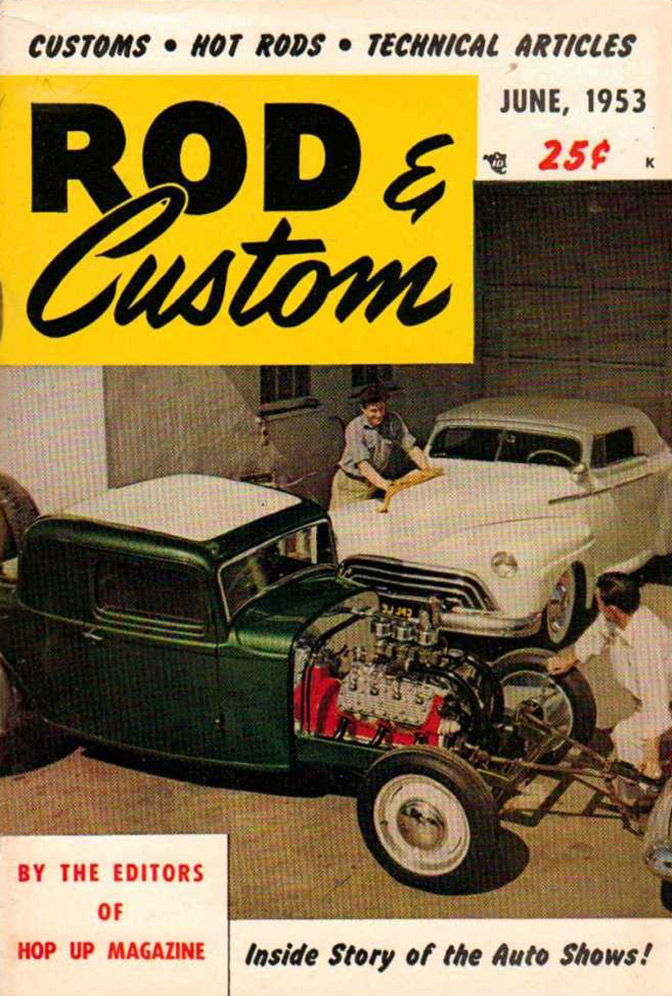 A few months later, Lew decided to sell the coupe to a buddy who within weeks wrecked the car in a race. Rather than scrap the old Ford, the new owner parked the car outside of Gene Winfield’s shop in Modesto. It sat there for years… maybe decades… until eventually is was sold off for scrap.

In March of 2014 the car was found, essentially untouched since 1953, sitting in a chicken coupe in Arkansas. Eric Arnett of Atlas Speed & Custom made the purchase not knowing exactly what he had found. BUT, the filled quarters lead Eric to the before mentioned premier issue of Rod & Custom. Soon, he had the car in front of both Lew Thompson and Gene Winfield. Both agreed that it was, in fact, Lew’s old car. 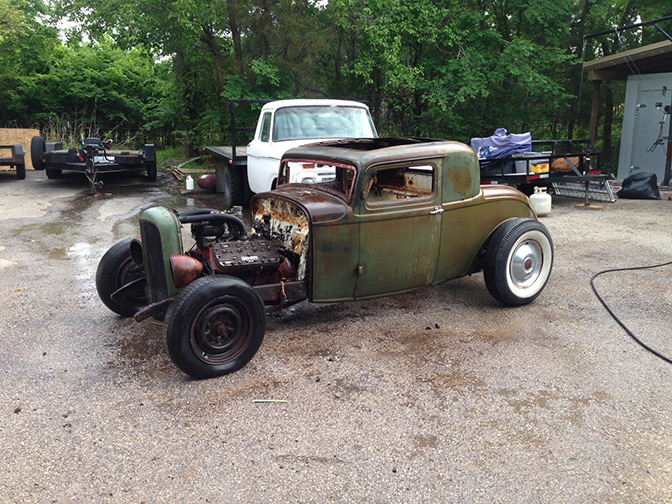 And here we are… Well, sort of… Eric commissioned the work of a lot of really talented people to restore the car. Guys like Bucky and Tuki Hess, our own Rusty Burford, Rob Taylor, Phil Cato, Brian Bass, Mike Herman, and even Gene Winfield have all been involved with the process in one way or another. And now, the car is at Rex Rods for final assembly.

The car has been here for a week or so, but I’ve been struggling over the decision to feature the build for a couple of different reasons:

First, lets address the white elephant in the room. The car has been changed. The chassis has been upgraded quite skillfully but in a way that is not period to the car. There’s a Tremec transmission, a different flathead, a Winters quick change, So-Cal shocks, and a host of other details that some of you might not agree with. I mean, this is The Jalopy Journal… We cover traditional hot rods here almost exclusively, so it would make sense that there would be some controversy over these changes. I get that. Hell, I agree… and most likely would have restored this car in a different manner myself.

But, you know what? This isn’t my car… and it’s not your car either. It’s Eric Arnett’s car. And there is some consolation in the fact that the car is being built to be driven. Really driven. And if that happens, some of these changes might actually be worth their cost.

Secondly, all Keith is responsible for is final assembly of the car in preparation for the GNRS. While the car is gorgeous to look at and extremely photogenic, there isn’t a whole lot of meat here for me to cover – certainly not enough for me to endure the controversy mentioned above, right?

It really wasn’t until this morning that I decided to cover the car anyway… For one, Keith has been met with some challenges during finally assembly that I think would be interesting to cover. And as for the controversial parts of the car, I’ve decided to lean on you guys for some help. Be easy on me, will ya?