Asleep At The Wheel

Posted by Ryan on September 9, 2008 and filed under: History

I don’t have anything of any real substance to write about today, so I thought I would break out one of my favorite images. It was taken on April 4, 1924 and features a lethargic Tommy Milton in the last and fastest Miller 183 ever built. The site was none other than the Muroc dry lake just outside of Los Angeles. Moments after they got Tommy conscious, he ran 151.26 mph.

To get there, Tommy’s boys reversed the 183-inch Miller motor for the sole purpose of exiting the exhaust on the left/drivers side of the car. Using modern formulas, it can be assumed that the little bugger made more than 1 hp per cubic inch. In fact, even a car as slippery as Tommy’s would need 200 hp to get up to the 150 mph range. Impressive.

The only brakes on the car was a clever little device on the driveshaft. The incredibly skinny rolling stock was airstreamed by discs located on both sides of the wheels. It was a package that was way ahead of its time. But hell… even if this car was slow, I’d still love this image. Check it out: 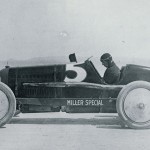