Bill Kenz has always fascinated me. I guess he first drew my attention while researching the early wars of the circle track. Maybe one of Kenz’s most successful innovations was his “Cragar Reverse Cam.” In the early 1930’s, Bill took a fairly stock Cragar and reversed the rotation of the cam. Through physics far too advanced for me to understand fully, the motor was able to run and beat the Miller 220 motors of the day. Craziness that was only equaled by the success of the Kenz-Leslie streamliner.

The streamliner, of course, dominated the salt through out much of the 1950’s until it was finally retired in 1957 after a 270+ mph trap speed. It’s a car that I’ve always fallen for in a major way, but have never really focused on. I started to do so this morning when I became sidetracked by a realization – the streamliner was the output of a past experiment. That experiment? The Odd Rod.

In 1944, Bill Kenz mocked up two flatheads between a set of ’31 Ford rails. The thinking was simple – double the displacement, double the power. Logic in hand, he pressed on… To sync the motors, Bill developed a complex system of pulleys and tubes to keep the front and rear carbs perfectly balanced with each other. He coupled the engines together by way of a driveshaft with universals at either end. A simple lever in the cockpit actuated a hydraulic clutch for the front engine. The rear engine was corralled by a conventional ’40 Ford clutch. Both plants were stock other than a set of Edelbrock heads and a “Kenz LZ” dizzy.

By 1946, Bill had the mechanics buttoned up and a body secured. The ’31 Ford truck cab looked a tad “odd”, but allowed great accessibility to both motors and fit the frame as it should. And besides, the Odd Rod was more of a proof of concept – streamlining could come later, right?

And as they say, the proof is in the pudding. Once buttoned up, Bill’s truck was capable of some pretty impressive numbers. The oddity could jaunt to 100 mph in a little less than 15 seconds and saw trap speeds of over 140 mph on the salt. That was all the evidence that Bill needed to start building a streamliner… And build it, he did… 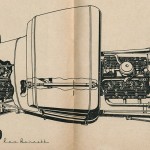 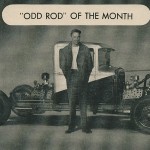 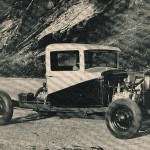 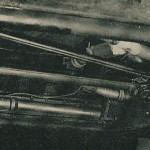 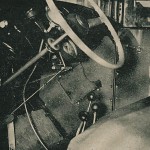 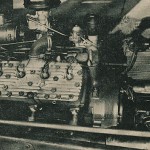 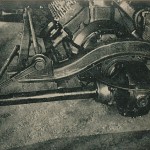