The Mystery Of The Illuminated Goodyears

For years, the image you see here has floated around the internet with little to no information attached. In fact, a common caption reads something like this:

“In 1961, Goodyear developed an illuminated tire.”

For whatever reason, this just wasn’t enough for me. So, a few years back I contacted Goodyear and asked for more details. I started by calling their customer service line and was met by your typical automated greeting system. You can probably guess how far I was able to get… I pressed ‘zero’ five times and ended up talking to a very confused operator with an IQ only slightly higher than the automated voice the call started with.

“You want information on tires with lights in them?”

To make a long story short, I was bounced around from rep to rep until I finally ended up talking to someone that claimed to be responsible for Goodyear’s design archive. He said he had no record of the tires and wasn’t even sure if Goodyear was responsible for them. “You might try Firestone,” he said.

And then last week, I met a man in the vintage watch world by the name of Gerald Moore. Through conversation, he mentioned that in a past life he was also a car guy and, in fact, worked at Goodyear as an engineer from 1958 until the mid 1970’s or so. As soon as that came out, my eyes got wide and the conversation shifted wildly.

“Wait a second,” I said. “You worked at Goodyear in 1961? Have you ever heard of or seen illuminated tires?”

Gerald laughed. “I assume you’ve gotten those emails too, huh? Yeah. I was there then and while I wasn’t involved with that project, I do remember it. How could you forget something so ridiculous?”

I got the scoop fellas…

As it turns out, illuminated tires were actually brought to Goodyear by an independent research and development firm in the late 1950’s. Back then, the folks in Detroit kept a close eye on market trends and they couldn’t help but notice some of the crazy tires folks were using on custom cars. So when the idea of illuminated tires surfaced, Goodyear decided to produce a set and test viability.

At the time, Goodyear was already well into messing with synthetic rubbers and had been experimenting with a petroleum based rubber that was damn near transparent. So they took a set of tires made of this weird ass rubber and mounted them on a set of wheels that had small dash lights mounted around the inner rim.

“During the day, they didn’t look all that impressive at all,” Gerald said. “But at night, it was pretty wild looking.”

“So,” I asked. “Why didn’t Goodyear go to market with them?”

“A number of different reasons put a halt to the effort,” Gerald said. “For one, the rubber was too expensive to make tires from. Ultimately, that’s what killed the project. But also, there were a number of hurdles to get over even if they could have gotten the rubber down in price. They had problems with consistently getting power inside the wheel to the bulbs at an affordable price. And, the rubber didn’t stay clean enough after regular driving for the effect to work. If, for example, you went to the grocery store and then back home again, the tires would lose their transparency just from regular rubber wear.”

And well… I’ll be damned… The mystery of the Illuminated Tire is no more. 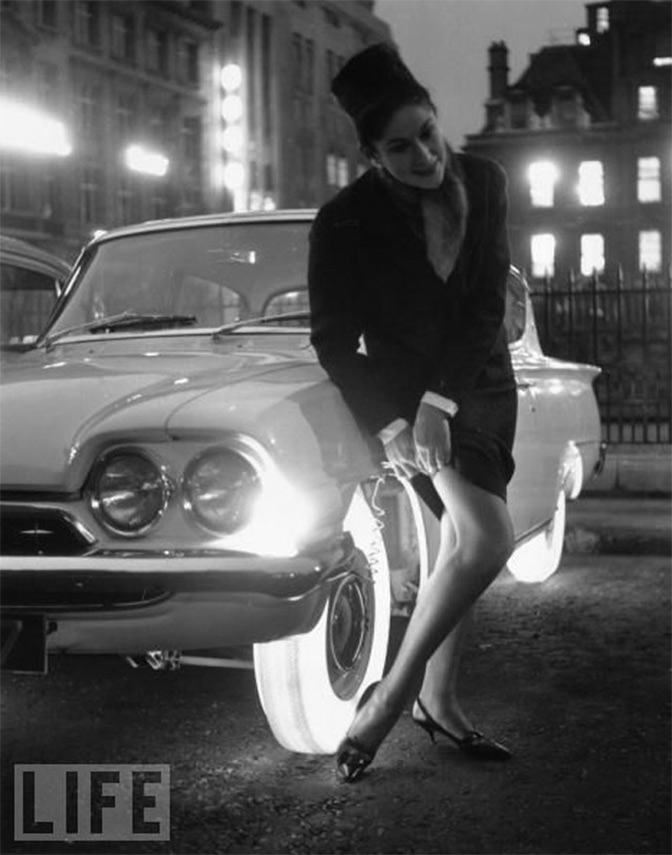