Posted by Ryan on November 17, 2014 and filed under: Art & Inspiration

I grew up around race cars and racing… My dad was the team doctor for VDS racing and I tagged along with him to well over 100 CART series races from the ages of five until well into my teens. In fact, I sat in the pits next to my old man at every Indy 500 from 1980 to 1992. And like any kid would be, I was in awe of everything that surrounded me. I decided by age six or seven that I was gonna be a race car driver. My dad never had deaf ears, so he seeded my ambition and put me to work in a racing cart. That experience, of course, lead to a tall ladder of racing endeavors that I was eager climb. Every step of the way, my dad was there to help and cultivate.

But it didn’t stop at racing… I first got into hot rods and customs when I was thirteen or fourteen years old. I can remember going to Hastings Book Store in Midland, TX and buying just about every book I could find on the subject and its history. From those books, I learned about Von Dutch and quickly grew a fascination for everything he did. My dad took notice and did what he so commonly did – essentially help me take my fascination to the next level.

At the time, Von Dutch was living in a bus that was parked inside a warehouse somewhere in Southern California. Somehow, someway… My dad was able to get ahold of him from Texas and arrange a meeting under the guise that he was interested in buying a knife from him. So, my dad and I flew to California so that I could meet one of my heroes… because, well… that’s just the kind of shit my dad pulled.

I will never forget my first sighting of that dirty old man. My dad pulled the rental car up to a set of profoundly large roll up doors attached to a nondescript warehouse located in a typical industrial area. As soon as the doors of the rental car closed, Von Dutch peaked out one of the man doors that flanked the loading bay. Very simply and sternly, Von Dutch asked, “What?”

Von Dutch lead us through the warehouse and into his bus. The inside appeared to be a den for someone clinically ill… or fucking brilliant… or both. Everything seemed as though it was covered in oil and metal shavings. It was as if a bum from skid row had completed a hostile take over of a working machine shop and the remains from each laid scattered about. Knives, flattened beer cans, guns, fast food wrappers, and odd looking mechanical devices laid scattered about from corner-to-corner. I was honestly and truly scared.

My dad didn’t seem to care or even notice. He was talking knives. Von Dutch handed over one after the other, showing off his collection of blades. “How much?” my dad would ask and each time Dutch would respond with, “sold” or “that one’s not done yet.”

By the time he got to the end of the stack, my dad knew he wasn’t leaving with a knife. He told me later that they were all pretty crude and nothing that he would have been all that interested in buying anyway… But, he did want to leave with something. “Look,” my dad said. “We flew all the way out here from Texas to get a piece from ya. Have ya got anything on hand you’d be willing to let go of for a reasonable price?”

“Well,” Dutch said. “I don’t know if you are interested in watches, but I’m just finishing up this little Swiss piece.” He took my dad over to a dingy table and showed him a tiny little watch with a face about the size of a quarter. He opened the back and exposed the miniature movement fully polished and detailed with the tiniest of engravements. The main gear featured a pair of what appeared to be versions of his famous flying eyeball separated by stars. Each was blued and seemed obviously penned by the engraving tool located on the desk next to us.

I was in love and spoke in his presence for the first time, “How much are you selling that for?”

Now, that’s some pretty hefty scratch for a fourteen year old. I worked at the local skate shop and made $3.75 an hour, but was good about saving and decided to let it rip given the special occasion. I handed Dutch the cash and he handed my dad the watch.

It’s probably a good time to note here that my dad was a watch guy. If Omega had a one year variation in a movement in 1976, he knew about it. If Patek made a one-of-one perpetual calendar in steel in 1963, my dad was on top of it. He was a horologist. He knew his shit.

Anyway, I took the watch home and stored it in my dad’s watch box. As the years went by, I didn’t so much as forget about the watch as I just put it out of my mind – knowing it wasn’t really a wearable piece and that it was safe in my dad’s collection. Earlier this year, my dad passed away and lately, I’ve been going through his collection of time pieces as a way of coping. A couple of months ago, I stumbled across the Von Dutch watch.

The find sparked an interest in Rotary branded watches of the 1940’s and I started to research. It didn’t take long before I discovered Dutch’s ruse. He didn’t engrave the movement. He didn’t polish the wheels and he didn’t blue the hardware. In fact, I don’t know that Dutch did anything to the watch at all other than take the case apart. See, just about every Rotary watch from the 40’s era featured the detailed movement with “flying wings” and blued hardware that Dutch claimed his own.

But that’s all beside the point really. Like I said, my dad knew watches and I know, without a shadow of doubt, that he knew what Dutch was up to. He knew what a Rotary movement looked like and he knew Dutch didn’t engrave this specific example. But ultimately, he didn’t care. He took his son to see a hero and he’d be damned if he let something like a little perfidiousness get in the way of that son’s dream.

Von Dutch screwed me… and it wouldn’t be the last time… But in the end, I still got one on him. I got a story and a watch worth more to me than anything he could have crafted on his own. 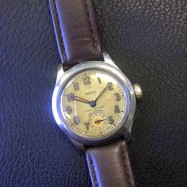 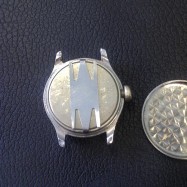 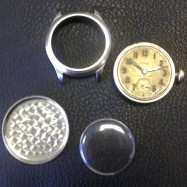 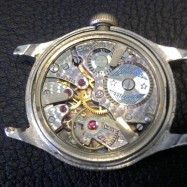 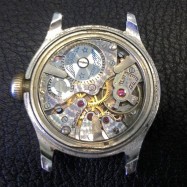