Posted by Ryan on September 29, 2014 and filed under: Feature Articles, Hot Rods

This is something I haven’t done a lot of in the past and won’t be doing much of in the future – featuring a car that has already had it’s day in publication. The car in question is Brian Auderer’s 1929 tudor sedan, otherwise known as “The Jewel.” You probably know it as what might be the last car to ever grace the cover of Rod & Custom Magazine. A fancy feather in the cap of a car that had a very dark birth.

In 2005, Joe Cabral was dreaming of his own interpretation of Ed Roth’s Lil’ Jewel. Rather than starting with a ’30 sedan as Roth did, Joe decided to go with the pinched cowl of a ’29. Through John Labelle, Joe was able to secure a body and from there he began to search for a shop that could make his dream a reality. He decided on Aces & Eights – a San Antonio based shop without much of a track history, but with plenty of potential. 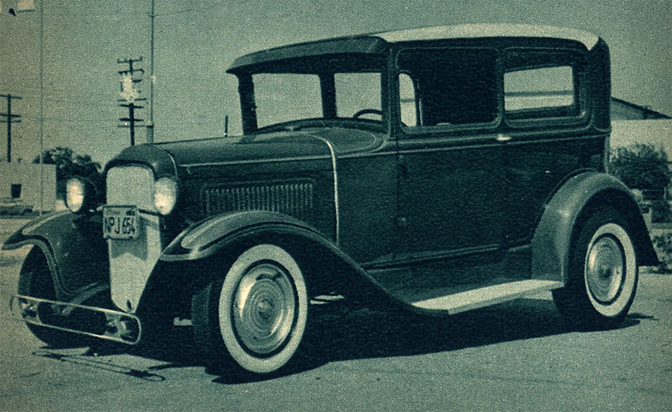 Not long after dropping the car off, a gigantic mountain of bullshit hit one of those Big Ass Fans. Casualties laid sprawled throughout central Texas and beyond. The owner of Aces & Eights disappeared and took all of his customer’s cars with him. To my knowledge, many of the cars have yet to be found while others were found partially or wholly parted out. Joe was “lucky.” He got his car back.

But the nightmare wasn’t over… The car that Joe got back was a mess and built so badly that anyone behind the wheel found themselves on the verge of death, dismemberment, and many other repulsive eventualities. But Joe, who is one hell of a nice guy, also had some of the best friends this world of our’s has to offer. Namely, Reggie Hill and Steve Wertheimer. Both came to the rescue with money, time, and comfort.

You might remember the epic thread that Reggie posted back in 2005 showing the dangers within what everyone was having a hard time calling “The Jewel.” Things like brake lines below the scrub line and steering boxes mounted with welds seemingly done by acid driven monkeys were the norm. “The car,” Reggie said “was an absolute death trap.”

So Reggie got busy… he rebuilt the chassis from the ground up and didn’t stop fixing the previously mentioned “craftsmanship” until Joe had a car that he could not only drive, but be proud of while doing it. It was his version of Roth’s Jewel and he drove the little sedan all over the country with nary an issue.

It’s at this point of the story that it would be prudent to introduce another member of our Austin crew – Brian Auderer. Like Joe, Reggie, and Steve, Brian is a member of the Kontinentals and a salt of the earth kind of guy. You won’t find a finer human being or one with more of a straight head. And, of course, he has some things in common with Joe Cabral. First, Brian’s roadster was also a victim of the Aces & Eights shop that hacked Joe’s car. Secondly, Brian has always had a thing for Model A sedans.

In fact, a while back Brian decided it was time to finally start on the sedan that he had in his head – one that would be heavily influenced by Joe’s car. It was around then, however, that Joe began thinking about selling The Jewel. One thing lead to another and the next think Brian knew, he was driving The Jewel through Joe’s home state of Louisiana and back home to Austin.

Through the summer and fall of 2013, Brian drove the hell out of the car and had a blast doing it. But close to a decade of hard driving was starting to catch up with The Jewel and Brian decided it was time for a facelift.

Here’s Brian in his own words:

“At the end of 2013, Austin Speed Shop was moving out of their old space and into a new one and Keith Tardel had come out from California to work at the shop.  I had dropped John Joyo an note to go grab lunch and catch up on things and let him know that I was happy to see some of the new changes ahead for the shop.  During the lunch, we talked about the sedan and I started talking about some of the things I had been thinking about – and said it would be cool if we could get the car freshened up by the Round Up a few months away. Maybe it was possible to tackle a few things on the list?”

You can only assume the fellas at the shop were pissed with John’s answer. It was on… and the speed shop spent the next three months busting their asses on the car. The fellas rechopped the top (an Aces & Eights leftover), fixed some poorly done patch panels (again, Aces & Eights), added a ’30/31 visor, and redid a whole host of other body work. While they were at it, they also freshened up the drivetrain and chromed a lot of the detail pieces. Meanwhile, the body was sent out to West Virginia – the home state of Tuki Hess’ paint shop. Tuki perfected the body and sprayed the “impossible to photograph” green over gold pearl paint.

Once back home and mounted on the chassis, the crew had a few days left before the car was to debut at the Round Up. They called in Phil Cato to freshen up the interior a bit, but things quickly got out of hand and soon Phil found himself redoing the entire interior plus the the top insert as well as the running boards. They buttoned the car up just in time for the show. Again, here’s Brian:

“By Thursday I was out at the Expo Center getting everything built and in place for the Round Up. I didn’t have any time to break away to check on things at the Speed Shop, but I knew it was a mad dash to the finish line. Mid morning on Friday (the first day of the show), my site crew came on the radio and said that the Austin Speed Shop was there with a car for their booth. I ran over to see The Jewel roll into the Round Up – looking at it all together in the sun for the first time. The Iguanas (Joe Cabral’s band) was playing the Round Up and Joe came over to check it out. Reggie broke away from the swap meet to take a look as well. We were all kind of blown away that the car was there and it was done. It looked so amazing. And to think back to where it came from… Everyone in this story was and still are close friends. And there we were, sitting at the Round Up together, looking at this car that was finally finished. It was just a fitting ending to a story that had such a dark start.”

The Jewel got The Jalopy Journal pick at that Round Up. It was, without doubt, my favorite car in attendance – not only because of the fit and finish, but also simply because of the story behind it all. See, these guys are all close friends of mine and in a weird way I feel connected to the car because of that. As I write this, Wertheimer and Brian are driving The Jewel from Austin to Baltimore for the Rodder’s Journal Revival. As you read it, they are probably on their way home. In between then and now, I’ll see the little sedan sitting on some grass in Baltimore and a smile will cross my face.

Damnit fellas… I love these old cars. I also love a lot of the people that come with them.

Editor’s Note: Shortly before Brian left for Baltimore, we took the little sedan out to Fischer Hall for a photo shoot. The green over gold pearl base is simply stunning in person and almost impossible to catch in a photograph. You’ll note some of these photos are taken of the car from the same angle, but under different lighting conditions. With direct light, the gold base really pops through the green giving you a dynamic and deep color. As the suns goes down, the gold becomes more muted and the paint begins to give off more of an olive look. The paint really is ever-changing… and I can’t decide which hue is my favorite. I love them all. Regardless, I’ve tried my best with the camera here, but take note – these pictures don’t do this car justice in the least. 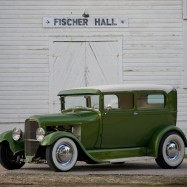 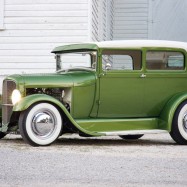 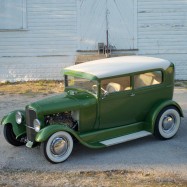 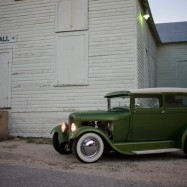 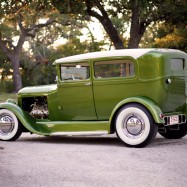 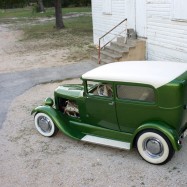 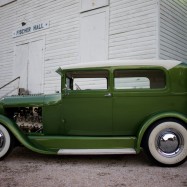 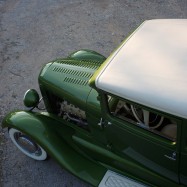 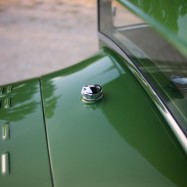 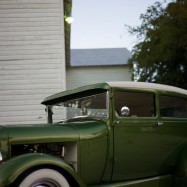 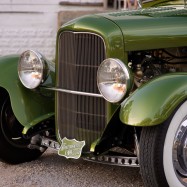 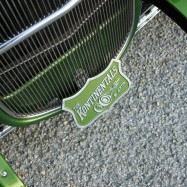 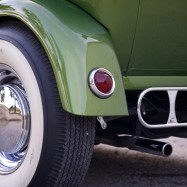 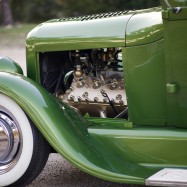 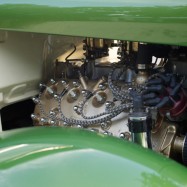 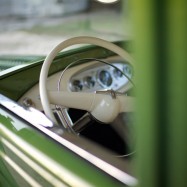 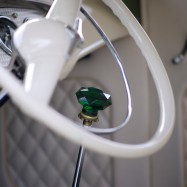 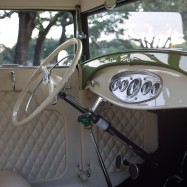 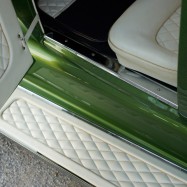 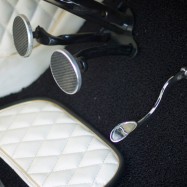 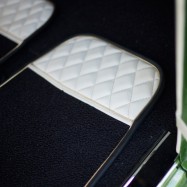 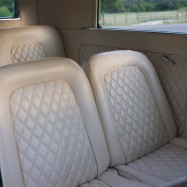 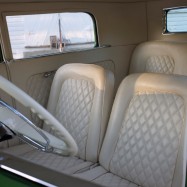 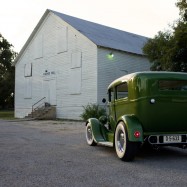