The nation was heading in a strange direction in 1966. War, riots and the imminent rise of the muscle car were on the horizon. Despite the weight of foreign relations and political tensions, the sparks of change were flying not only on the streets, but also in garages across the country.

By the mid-‘60s, an influx of coupes, sedans and roadsters once built for street use started transforming into purpose built machines. Carters were swapped for Hilborns and tuck’n roll was ditched for aluminum panels. But these conversions weren’t restricted to simply street and strip — a handful of cars shifted from street to show.

Oregonian Gerald McBee’s ’28 Model ‘A’ is a prime example of the type of rod winning shows during this time period. In this case, Gerald and his twin brother Jerald started with a stock ‘A’ coupe. The car was channeled 7 inches and received flowing, molded rear fenders and an artfully scooped cowl. Out back, the ‘A’ sported ’59 Comet taillights sunken into an almost Silver Sapphire-esque rear pan. A relatively mild ’55 Olds mill equipped with a quartet of Strombergs was placed between the rails.

Other than the button-tuft roof upholstery by Mark Tomlinson, the nosepiece was the focal point of the lime gold coupe. Gerald said this grille setup was created to follow the shape of the radiator, and it also served as a prime mounting point of the 1928 Oregon license plate.

Was the overall look of McBee’s coupe a little strange? I’ll wager most of you will say yes. However, if you examine some of the other custom rods of the period, this type of machine was in vogue. Think of the big ones: Andy Kassa’s ’32, the A-Bros.-built 69er and even the ‘Lil Coffin. Radical body modifications were the name of the game — and it’d take a radical nosepiece to catch the attention of show goers and judges alike.

Interestingly enough, this custom-rod style hasn’t caught on in the 21st century. Junichi Shimodaira’s Model ‘A’ stands out as one of the strongest examples, but for the most part sculpted noses and upholstered tops never left the ‘60s. Maybe for better, maybe for worse, but there’s no denying that those were strange days. 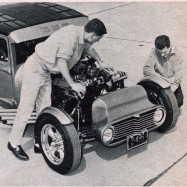 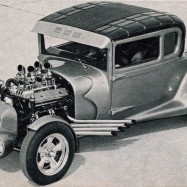 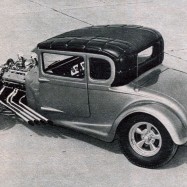 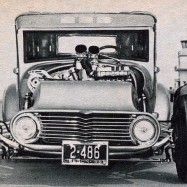 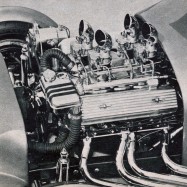 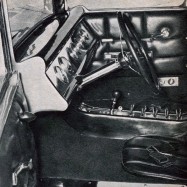