Posted by Ryan on May 9, 2008 and filed under: Feature Articles, Folks, History

I’ve mentioned this before, but Marcie and I are getting ready to have our second child here in about three weeks. As you might imagine, I was pretty excited to hear that we were having a boy. Of course, like all parents do when they get the news, Marcie and I both started racing for names. In the end, we decided on “Miller.” Now, technically Miller is a family name… BUT, I would be holding back if I denied my excitement around the history of that name as well.

Harry Miller is more than likely the single most important figure in American auto racing. His designs, innovations, and breakthroughs of the early 1900s are still widely recognized and used in many of today’s racing leagues. It’s all stuff that is pretty damned easy to get excited about… and so… well, I’ve become obsessed.

The last few weeks of my life have been primarily spent doing two things:

2. Reading anything I can get my hands on about Harry Miller, his motors, his cars, and his accomplishments.

The first few days were spent primarily learning about Miller’s personal endeavors. While he certainly has not gotten the kind of recognition his contemporaries went on to enjoy, I think most of his accomplishments are widely known amongst the fellas around here that have a thirst for that kind of thing. Even so, I’m sure we will get into and regurgitate Miller’s specific accomplishments at one point or another. He just did so much so well, that it is hard not to mention him every now and then when considering hot rods and history.

Anyhow… Once I had a fairly firm grasp on those specifics, I moved on to see how his life and work impacted those around him. If you know anything about Harry Miller at all, you know that his legacy forms a family tree with more branches than could possibly be imagined by someone with just a mild interest. Miller’s innovations were the foundation for the careers of guys like Fred Offenhauser, Riley Brett, Art Sparks, Wilbur Shaw, and many others. If dominance appeared in the auto racing scene of the early 1900’s, it was a pretty safe bet that one way or another that dominance was connected to Harry Miller.

Just prior to the great depression, the world of auto racing was focused on the great race for the Land Speed Record. Initially (and for some time afterwards actually), this race was dominated by the British. In a kind of roll reversal of the future, the British were actively seeking out the biggest damned aircraft engines they could find and stuffing them (sometimes multiples of them) into huge cars with little regard for power to weight ratios while one American was thinking about high revs and low weights. That American was Frank Lockhart.

By 1927, Lockhart was already an accomplished driver with many wins (including an Indy 500) under his belt. However, it was during that year that he decided to take his Miller Special to Muroc. The reasoning differs depending on which historian you trust, but I like to think Lockhart held speed as a passion of sorts… and what better way to celebrate that passion than with straight line timing tests? 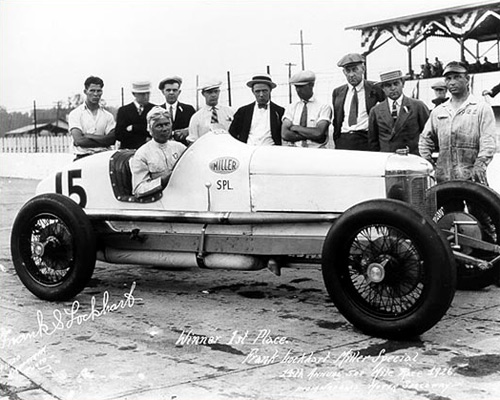 Frank Lockhart in his Miller Special. In its roundy/round form, the roadster was well capable of 150mph. Nobody was quite certain what it would do given a longer straight line.

Much to the surprise of many, Lockhart ran 171 mph on the dried up lake with his 91″ Miller screeching to 8000RPM – numbers made even more impressive when considering the competition. Just a month prior to Lockhart’s run, H.O.D. Seagrave broke the Land Speed Record in his twin aircraft engined beast of a streamliner that made well over 1000 horsepower. His speed? Just 32 mph faster than Lockhart’s. Frank was on to something and once again, Miller was behind it all. 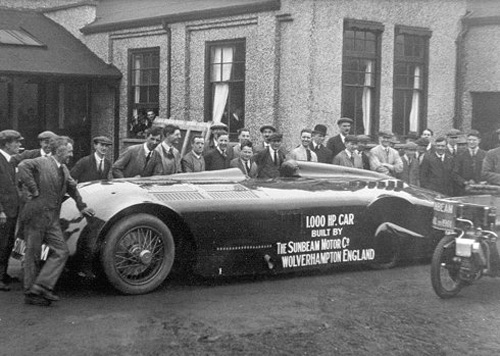 With the obvious potential behind Lockhart’s efforts, it didn’t take much from him to drum up some sponsorship cash to make a run at the record. Legendary racing figure and president of Stutz Motor Company, Fred Moscovics, handed over what totaled to be in excess of $100,000 in 1927 money to help finance the effort. With that kind of cash and a year’s worth of development time, engineers do what engineers tend to do given the resources – innovate and complicate.

Lockhart’s team started with two Miller 91 engines that were geared together with a common crank case. The U-16 had a 2 3/16″ bore, 3″ stroke, and weighed in at about 183 cubic inches. The common Delco coil and battery ignition sparked fuel that was delivered by way of two Zenith DD carbs choking down air fed from two Miller superchargers. All that power was transfered to a special 3-speed tranny, through a torque tube, and on to a Stutz worm drive rear-end.

With the power figured out, the team moved on to the chassis. What is now considered an overly complex system of cantilevered springs made up the front and rear suspension systems. The axles were spread about 112″ apart and the tread measured up to about 52″. The obvious and most notable feature was the Ross duplex steering box. Similar to the box featured on the Golden Submarine, the Ross allowed the team to run drag links on each side of the car – effectively eliminating any tie rod up front. The result is perfect example of exemplary fabrication work, even by today’s standards.

Originally, Lockhart had planned to build a body that encompassed the wheels. However, further consideration for weight and a drive to keep the frontal area to an absolute minimum made him and his team rethink that idea. In the end, they built a streamlined torpedo shaped body and encased the rolling stock in complex fairings. The effect was something along the lines of the German rocket aircraft that would appear years later in WW2. 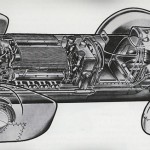 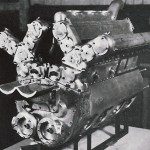 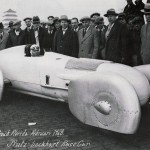 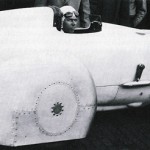 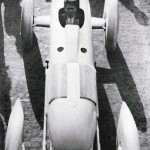 By 1928, the car was finished and ready to attack the beaches of Daytona along side the famous Malcolm Cambell and his Bluebird as well as J.M. White’s Triplex. The event was sold to the world as a battle of the fastest men alive. The Bluebird and the Triplex had a combined cubic inch measurement of well over 2000, while the little Stutz Blackhawk (A financial name for our hero’s car) measured up to the before mentioned 183. You have to think that some giggled.

After the first run, however, the giggling must have stopped. Frank saw north of 225mph before something failed and the car rolled into the surf. Amazingly, Lockhart wasn’t hurt and the car was salvageable. Shortly thereafter, the triplex stole the show and the world record with a 207 mph run.

Not to be out done, Lockhart got his car back together for another run three days later. The weather was bad, but they went for it anyway. A tire blew on the big end of 200, the car rolled violently, tossed Lockhart, and killed him instantly. 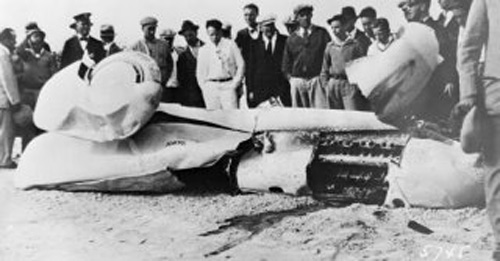 Hot Rods are dangerous... Always have been.

It’s pretty realistic to read this story and look at these images and conclude that Lockhart’s car, while stunning, was a failure from both a performance and an engineering standpoint. However, given the aerodynamic characteristics of the car, the frontal area dimensions, and the known power of the Millers inside; modern software predicts a car capable of running past 250 mph. Add some modern potions such as nitro and it’s conceivable that if this car was still around today, it could pass the 300 mph mark with relative ease – well north of the current sub-200″ SCTA record.

Remember, this was 1928. Miller AND his disciples were way ahead of the game…