Posted by Jive-Bomber on March 18, 2014 and filed under: Art & Inspiration

There are plenty of you on the HAMB that appreciate vintage hot rod toys, and I’ve written a few articles about these collectables from time to time. Last night I showed my young son a few of my 60s Nylint pressed metal vehicles he could play with. They are Tonka-tough, and will stand up to decent amount of abuse compared with a fragile die cast replica. For those of you not familiar with the name, the Nylint Corporation of Rockford, Illinois made all sort of metal construction and transportation vehicles from the late 1930s through the end of the 20th century. They had a nice relationship with the Ford Motor Company, making their dealership replica vehicles in the 50s and 60s, also making some great Ford-based hot rods like a Model T Roadster Pick up (with velocity stacked V-8!), Drag Racer, and Roadster coupe with camping trailer or race car in tow! When you look back at all the American made large-scale pressed steel toys of this era, you might find a random hot rod or racer here and there, but it’s rare to see a company that offered so many cool hot rod models and paint variations, lasting for decades. Cool stuff! 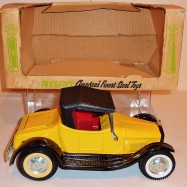 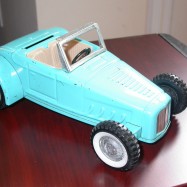 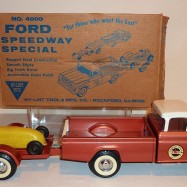 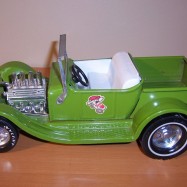 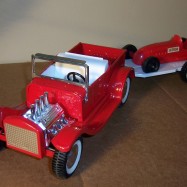 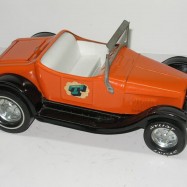 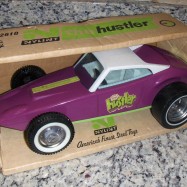 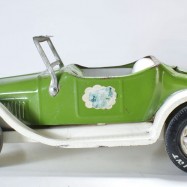