Cops vs. Hot Rodders? Not Anymore…

Posted by Jive-Bomber on September 25, 2013 and filed under: History, Hot Rods

I went to local car show last Saturday and the event ended with an annual classic car parade, assisted by the town police who were blocking intersections for us along the route. It’s a strangely satisfying feeling to run red lights with officers waving you on, while grumpy self-righteous Prius drivers glare at you, forced to wait. That moment reminded me how far the once-negative perception of hot rods has changed in the mind of law enforcement. I can’t remember ever being pulled over in my ’29 roadster despite it having no fenders, loud exhaust, minimal lighting, and other dodgy safety specs… Johnny Law usually just watches me cruise past or maybe even gives a smile or a wave. One time nearly 20 years ago I was pulled over in the city of Orange in my ’49 Lincoln Cosmo- No bumpers, straight side pipes, and the 1956 license plate was hanging from bailing wire. I had pulled some some kind of illegal turn and the officer lit me up, only to give me a warning and let me go after asking me what kind of car it was. Crazy, huh? If I was in a lowered Civic that night there’s a good chance some sort of fix-it ticket would have been given. We are pretty fortunate to be living in a time and place where our Jalopies are largely appreciated rather than being seen as a threat to society as they once were. Maybe the police realize that we’ve put too much time and sweat into our 50-75 year old cars to do something stupid, or that a Flathead powered, 3 speed roadster probably isn’t going to outrun a new Crown Vic with a helicopter back-up. Heck, I’ve got a handful of old car buddies that actually are police officers. I’m just glad Wally Parks and many of the founding member of the NHRA lived long enough to see hot rods get the respect they deserve. 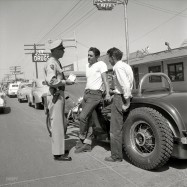