Posted by Jive-Bomber on June 7, 2013 and filed under: Customs

You could have guessed this would be coming… I’m seeing Ryan’s ’56 Chevy post and once again raising him, to a ’57. It’s well known in traditional sled circles that the iconic 1957 Chevrolet doesn’t get much focus as mild, late 50s style custom. On the rare occasion we do see a ’57 in the pages of a rod magazine, its usually a bumper-less 60s style gasser, or the occasional Nomad. Maybe mild ’57 customs are rare because that particular year Bel Air is considered the ubiquitous ‘Nifty Fifties’ American car, somewhat known by pretty much every walking stiff in the world. How many times has some random person asked you if your old car is a ’57 Chevy, when it’s not even close? (I get that one quite a bit.) As I scanned through the old archives looking for a 1957 Chevy coupe that was mildly customized in the late 50s or early 60s, not very many cars seem to materialize. Ed Roth’s ’57 was pretty much just a paint job, and Barris’ El Capitola was too radical to be anything but a show car. Everything else seems to have tunneled quad headlamps and too much body filler. I did find this nice little East Coast convertible called “Blue Angel” on Rikster’s page. We’ve got a nicely lowered Bel Air with a two tone blue panel paint job, white scallops and striping by Dean Jeffries, nicely nosed, decked, with Corvette grille teeth, and rolling Plymouth wheel covers. On the inside we’ve got classic tuck and roll upholstery and a ’58 Impala steering wheel. Did you check out the taillights? Two frenched ’57 Caddy bullets placed in a ’58 Cadillac arrangement. This one works for me, and besides ditching the white bumper bullets and fake spots, I’d drive this one as-is. 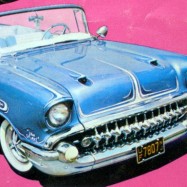 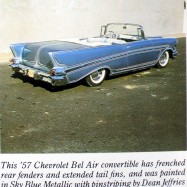 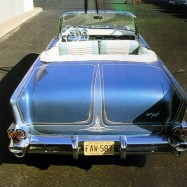