The Ugliest Kustoms of the 50s

Posted by Jive-Bomber on February 21, 2013 and filed under: Customs

There’s just no easy way of saying it here, folks- Not every custom creation was thing of beauty in the 1950s. By the second half of the decade, customizing was often less about modernizing an older car, and more about getting the most stares or slacked jaws at a car show. I believe that tasteful style is best achieved in subtle restraint, as the most successful Kustoms require a second and third look to see all the work involved. The examples I’ve listed below are more likely to hit your eyes with a sledge hammer. Here’s my top homeliest fifties custom cars, in no particular order of shame (and please add your own):

Raymond Besasie’s X-2: I don’t even know where to begin with this thing. The rear mounted Caddy motor is intriguing, but that’s where the fascination ends. The tacked-on 4-foot-high center wing and insanely random bodywork do nothing to help this car’s plight. It’s absolutely shocking that Motor Life named the X-2 one of 28 “Top Customs of the Year” in 1958.

George Barris’ Modern Grecian: Square chop, quad fins, bizarre grille work and pearl yellow paint… Ouch. Earl Wilson’s 1947 Studebaker sedan was a strange candidate to start with, and Barris Krazy Kustomizing only made matters worse. I just can’t find much redeeming about this car except the swivel seats and the console-mounted telephone!

Jim Doyle’s 1952 Mercury Convertible: This Joe Bailon custom is typical of the late 50’s excess- Extended, stacked quad headlamps, split tube bumpers, and a freaky tail below the deck lid. It’s hard to tell that this car started life with any of the style or grace of a ’52 Merc, and makes you wonder what the end goal was in this case. (Take a look at Emil Oxen’s ’57 Ford Convertible as a similarly-styled tube bumper disaster.) 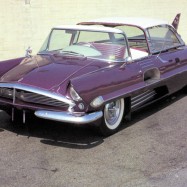 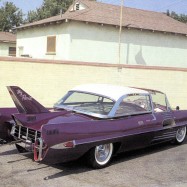 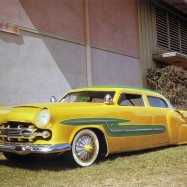 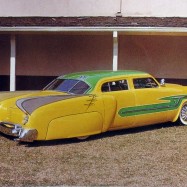 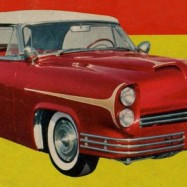