Posted by Ryan on January 21, 2008 and filed under: Feature Articles, History, Hot Rods 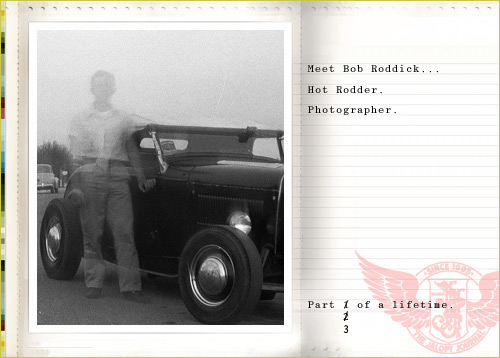 It’s 1951 and Bob Roddick sits in his driveway with his pops by his side. The two work a torch and heat the flathead block that lay victim to an accident Bob had a year prior. Amazingly, these two fellas aim to weld up the cracked block and prep it to go back in Bob’s ’32 roadster that was overhauled as well. Even more amazing is the fact that the two succeeded.

Before long, Bob had his roadster back on the road and the race track. Freshly lettered with a new number (109c), the hot rod ran as fast as 131 mph at El Mirage. Unfortunately, it’s unclear what happened to the car from this point forward. Bob was drafted into the marines in 1952 and all traces of the car seem to vanish from that point forward. 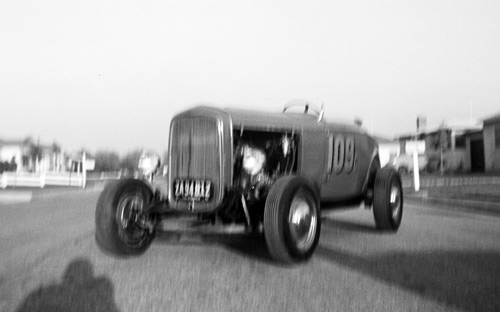 However, by 1954 Bob was back at home and back working with Ray Brown. During the day he played the part of an engineering collegiate, but at night he helped Ray in the innovation and manufacturing process of passenger car seat belts. In 1955, Bob married his girlfriend Betty and took the path that many of us do – the path of security for the family’s sake. He graduated from Berkeley in 1958 and then spent the next 10 years working in the aerospace industry. 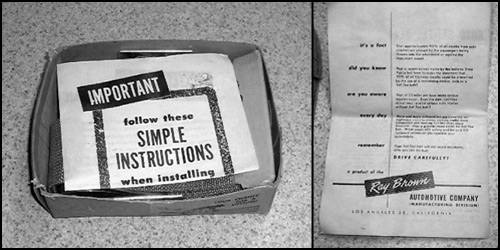 Bonneville veteran, Marine, Hot Rod Magazine model, and yes... One of the innovators of the passenger car seat belt.

Sometime around 1970, Bob stumbled into the swimming pool business and spent the rest of his life as an entrepreneur of sorts. He passed in November of 2007. He was 76 years old.

Up until just a few weeks ago, I thought that this is where the story ended. I was sitting in Phoenix, AZ at the Fiesta Bowl (watching my beloved Sooners play) when I felt my iPhone buzz. The game wasn’t going exactly as planned, so I decided to take my mind of things for a bit and check my email. That’s when I read Dave Clark’s note titled, “Wait, there’s more!”

Dave and Gwynn had been at their father’s house organizing and cleaning when they stumbled upon yet another bundle of unprocessed film. After a few restless days waiting for development, it instantly became clear that the Bob Roddick story was going to take more than two or three installments.

Like the other photos featured in this series, these images have never been seen outside of the Roddick family – much less published. The time frame runs from around 1950 to 1952.

Bob hands the camera to a buddy and we get to see a blurry shot of Bob in his roadster. 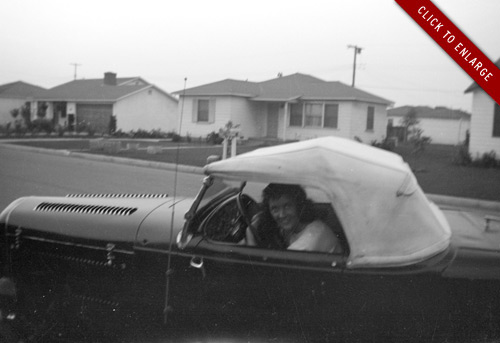 I wonder if this nice looking young lady is responsible for the shot above? 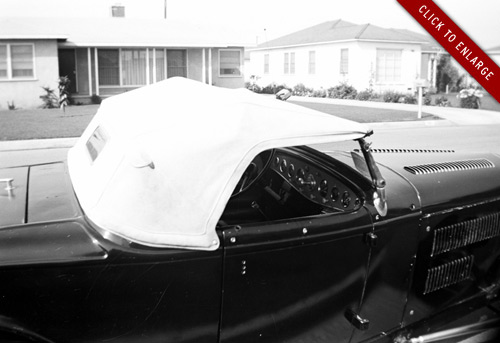 Check out the dash full of 2 5/8-inch Stewart Warner gauges. 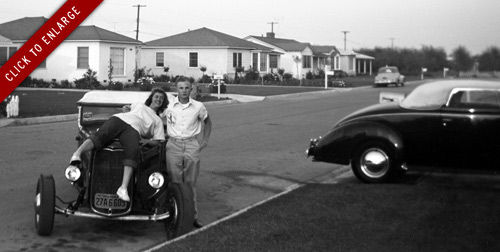 Bob and his girl monkey around on the deuce while Bob's brother's custom lurks in the background.

While Bob had a passion for speed, it appears as though Donald Roddick had an eye for style. Early customs don't get much better than this - perfect chop, Hollywood flippers, and dig the grille inserts. 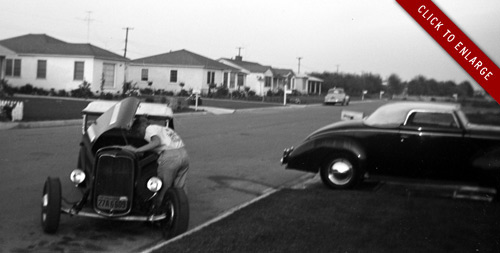 They say customs are for getting girls and hot rods are for losing them... This picture is evidence as to why. 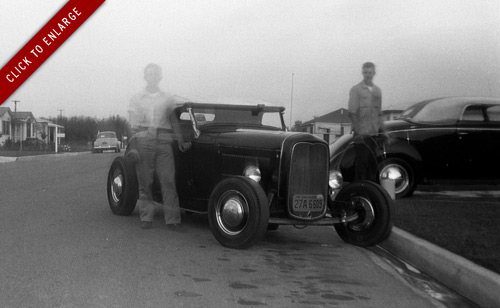 This is really THE photo of the set. It's a double exposure that portrays a ghostly image of Bob over his roadster while Donald washes his '40 in the background. 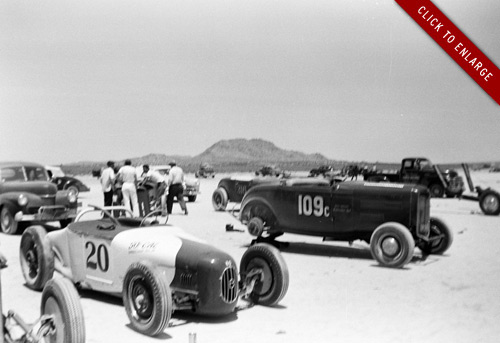 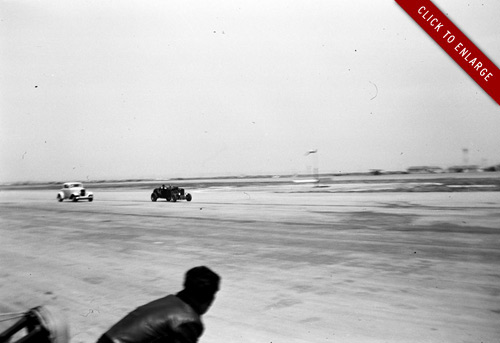 A full fendered 3-window and a roadster battle it out at the drags. The location is unknown, but the composition of the image certainly hints at it being taken at an air force base somewhere. 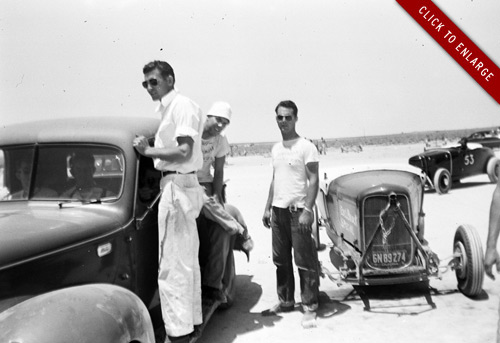 If Ray Brown's truck could talk, it would have some mighty fins stories to tell - huh? That's the 'Edelbrock Special' sporting the tow bar. 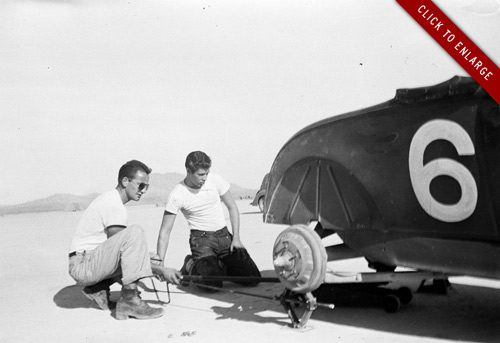 Jim Dahm was a member of the Pacers car club and ran this sleek little roadster at El Mirage in 1951. He won the 'B' modified roadster class with a 141.287 mph run. 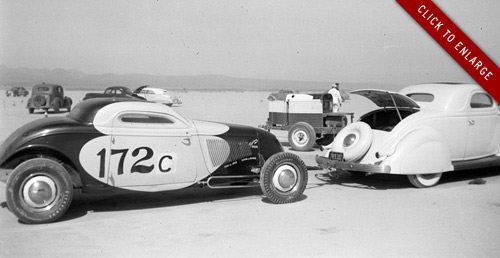 The Pierson Brother's Coupe around 1949 or '50. Bob Pierson's '36 was a double threat as a tow car and a race car. The chopped '3-window was often converted to run on alcohol and saw speeds north of 120 mph.

Ray Brown and some other Sidewinders shoot the shit. 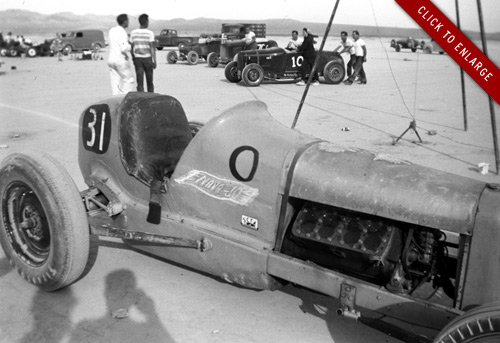 The Nava-Jo sits headless near an El Mirage loud-speaker stand. A '29 on deuce rails gets pushed around in the background. Lettering just above the deuce reveal line reads, 'Go Mother GO GO!' 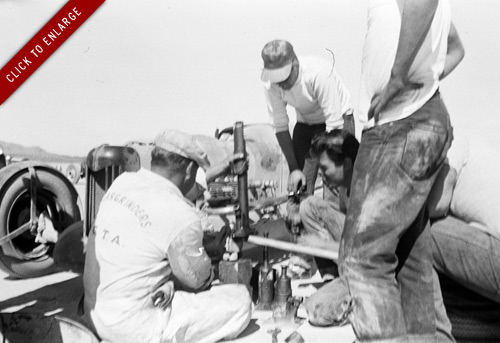 Whatever the problem, it was nothing a couple of bottle jacks and a spent axle tube couldn't fix. 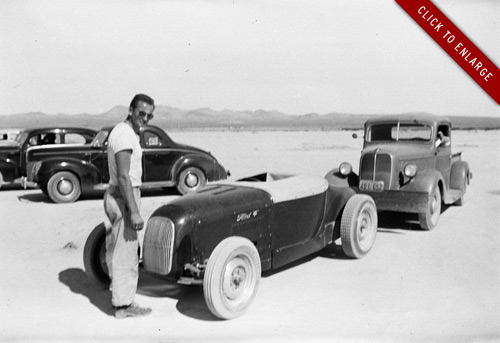 One of my favorite roadsters of the period - It's the Cooper-Hayes class 'B' lakester powered by a Fargo headed Ford 4-banger. I've seen it once before in a Don Montgomery book (Thanks Don!) and have always wanted to see more of it. Bob gave me that chance.

And that’s that… But, that’s not all. Next week we will wrap up the Bob Roddick series and show off all of the “take-out” images that we didn’t show while trying our best to tell a linear story. Ironically, these are some of my favorite images and I think you’ll dig them as much as I do. Until then, enjoy studying the images of part 3.