Posted by Ryan on January 14, 2008 and filed under: Feature Articles, History, Hot Rods 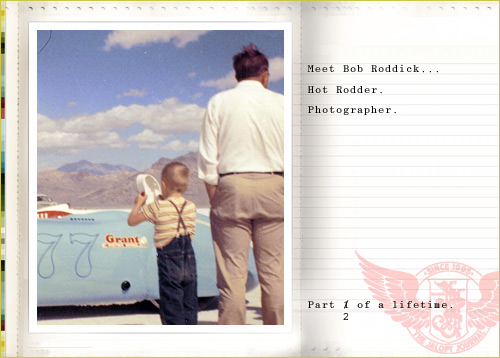 When we last left you in Part 1 of this series, it was late in the year of 1950. Bob Roddick had wrecked his ’32 roadster, was in the process of rebuilding it, and was spending his free time at the track manning his trusty camera. The result was a rare glimpse into the birth of hot rodding from the eyes of a guy that was in the middle of it all.

Skip forward almost 50 years to 1999… Dave Clark had just started dating Bob’s daughter Gwynn. He sat in Bob’s living room trying with all his might to give off the image of a real car guy and a respectable companion for his daughter. Much to his delight, Dave passed the test and it wasn’t long before Bob left the living room only to return with a dresser drawer full of old photography. Much of that photography was seen in part 1, however this story is about to get more colorful. See, in that same drawer full of black and white paper was an undeveloped roll of Kodak’s finest color.

After some cajoling, Dave was able to talk Bob into letting him get that 50 year old roll of film developed. It’s impossible to put into words what came back from the photo processor. “Beautiful” isn’t a strong enough word. “Glorious” isn’t descriptive enough. “Remarkable” simply isn’t passionate enough. To people that live their lives curious about history and the lives that were lived before their own, these color snap shots represent a rare opportunity to see things a little more clearly… to see things as they were.

Back to Bob. Back to 1951. Armed with his trusty camera and that before mentioned roll of color film, Bob headed to the Bonneville Nationals as part of Ray Brown’s crew. It was an incredible year on the salt and those that attended saw all but one of the records from 1950 fall. There were 197 cars entered (same size as last year’s H.A.M.B. Drags) and 1,689 passes made through the traps.

The following photos came from Bob’s camera. Before today, you could count the number of people to ever see them on two hands. 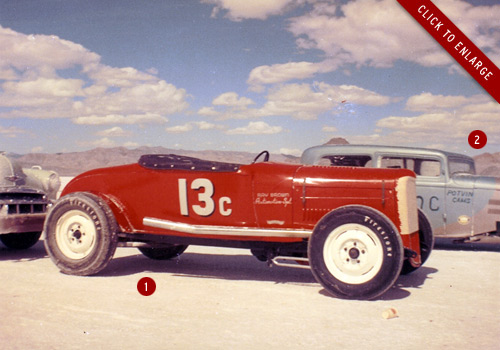 (1) You might remember seeing the Ray Brown Special sitting engineless in front of Ray's shop in part 1. Here it is ready to race in glorious color. Red... Who knew? (2) Sitting along side the 13c car is the Boren & Keldrank sedan. The heavily hammered sedan made a 128.11 mph pass just after this photo was taken. 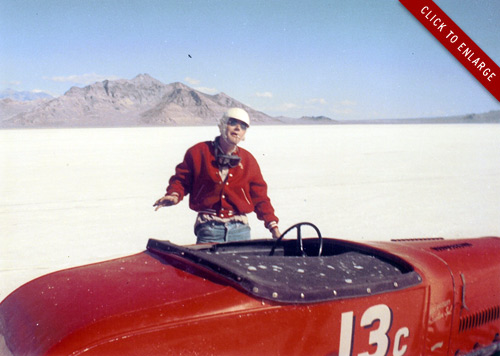 The Ray Brown Special was driven by Malcom 'Mal' Hooper. If someone really important was giving out an award for the 'coolest person' in the last 100 years, this picture alone would put Mal near the top. Blue jeans, club jacket, racing goggles, crash helmet... and oh yeah, a smoke to live on. 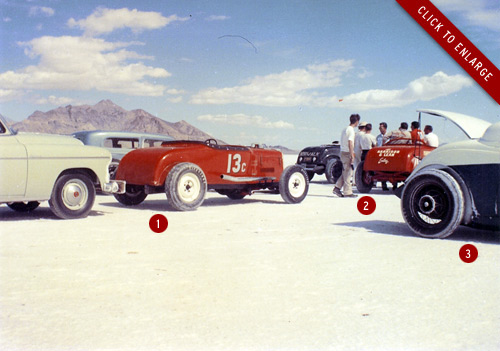 (1) Mal Hooper's ride again... His is a name that you should know. Just a few years after this picture, Mal would go on to own and pilot the record setting Shadoff Special streamliner. (2) Another Ray Brown powered car - the Harrison & Lean roadster. (3) I had a hell of a time trying to identify this car, but Don Montgomery knew it as soon he saw it... It's the class 'C' modified coupe ran by John Browning. 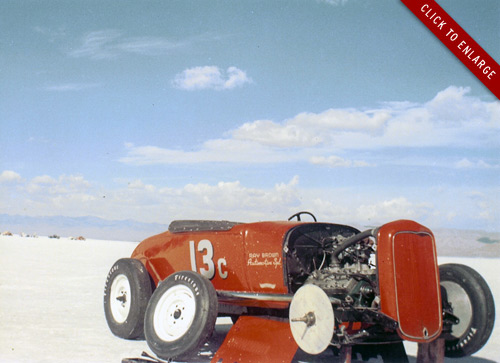 Hop Up Magazine's coverage of the event mentions that Mal's car had mechanical trouble all week. This photo is just further evidence of such. 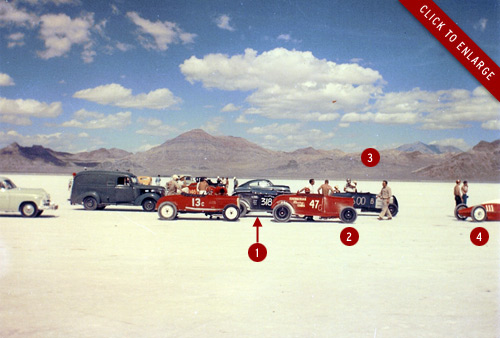 Bob stepped back to get a wider angle shot of the Ray Brown team preparing to run a couple of roadsters. (1) The Robinson & Zabel class 'C' roadster. It's best time of the meet was just over 154 mph. (2) A better shot of the Ray Brown powered Lean & Harrison Roadster sitting just in front of the 13c car. (3) Car 600B was the roadster entry of Johnson Bros. and Minorini from Los Angeles, CA. (4) The ass end of the famed So-Cal Speedshop lakester. 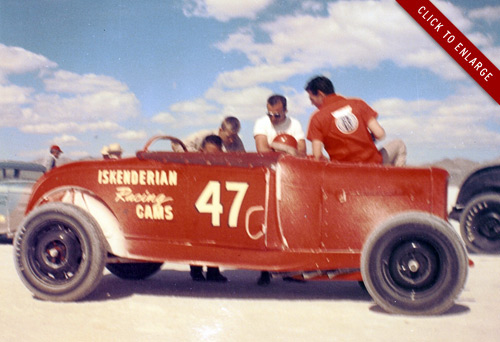 An SCTA official checks in on Norm Lean and Doug Harrison as they get ready for a run. Their 296-inch merc motor was built by Ray and powered the car to a best of 152.801 mph. This car was flat towed to Bonneville from LA by Norm's killer '34 roadster. 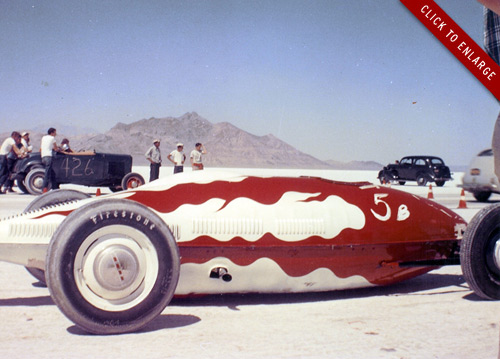 The Ray Brown lakester (also piloted by Mal Hooper) sits driverless in the staging lanes. Mal must have been busy taking the 13c car for a pass. 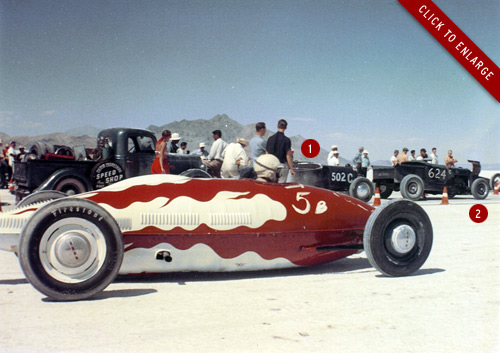 By the time Mal straps in the lakester and gets ready to roll, Bill Waddill in his 130 mph roadster (1) as well as George Cromer in his 121 mph class 'C' pickup (2) have joined the staging lanes. 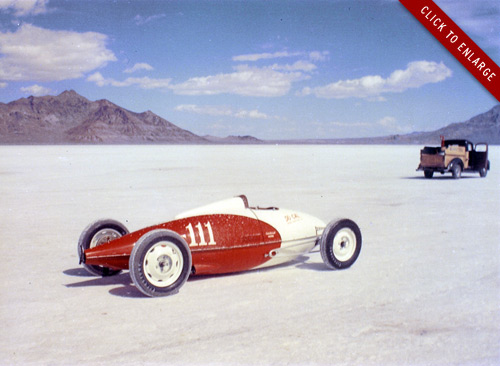 The So-Cal lakester was at the time owned and ran by Xydias and DeLangton. They turned a class 'A' record speed of 147.01 mph. 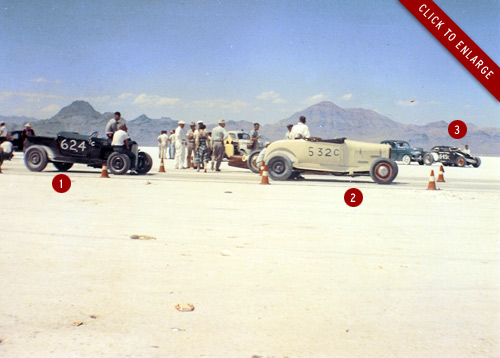 (1) George Cromer in his class 'C' pick up ran 121 mph. He's lined up just behind Allan Thomas in the super sanitary appearing roadster (2). In the background, you can just make out the profile of the crazy and GMC powered DuBont & Herbert class 'C' modified sedan (3). As knarly appearing as the little Crosley sedan was, they still managed to squeeze 149.26 mph out of it. 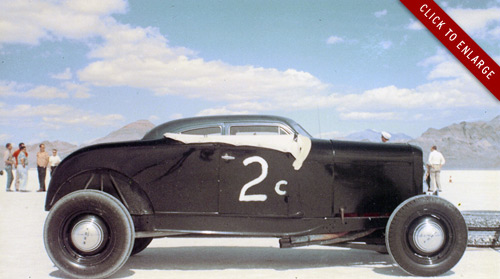 Bill Likes took home the record for class 'B' roadsters. He and Fran Hernandez then teamed up with Fran's class 'C' engine to take home second in that class. 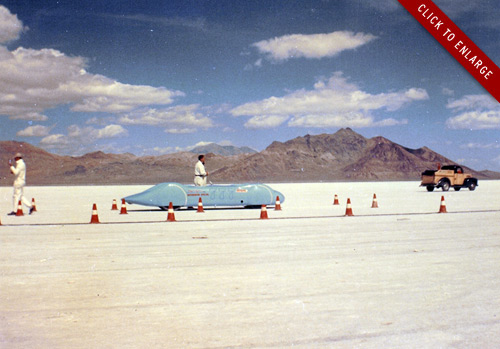 Floyd Clymer's Motorbook Special... Floyd was the money man, Bill Kenz and Roy Leslie were the builders, and crazy ole Willie Young was the driver. In this shot, Willie is preparing to run while SCTA officials look on. 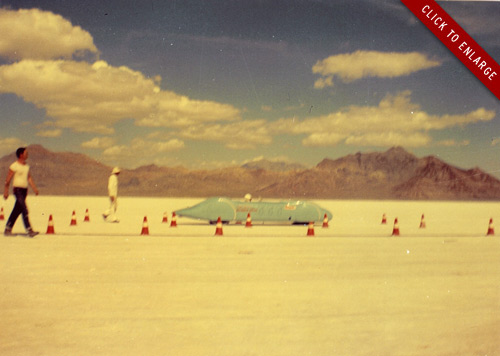 A few moments later and Willie is on the throttle... 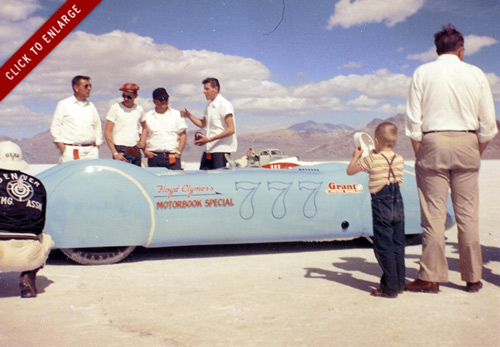 The Kenz-Leslie streamliner ran out of Denver, Colorado. The 'Denver Timing Assn' jacket on the far left is noteable for sure, but you can't look at this remarkable image without wondering where that little boy is now. 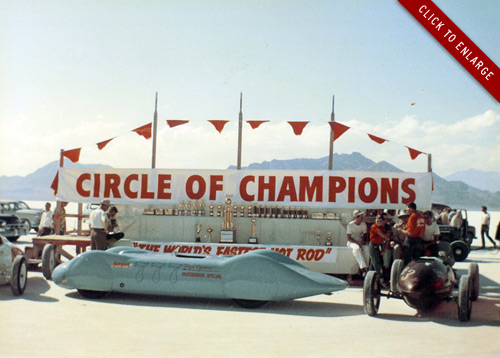 The twin flathead powered (one fore, one aft) beast took home the National Hot Rod Championship perpetual trophy for fastest one-way speed (230.77 mph). The Kenz-Leslie team also established a new two-way record for American cars with a 221.48 mph average. Of course, this is the same car that first broke the 200 mph hot rod barrier just a year earlier. The fellas from Colorado would continue racing the car for many more successful years. Kenz-Leslie finally retired the car in 1957 after running just over 270 mph. Note: The So-Cal (left) and Earl Evans (right) lakesters flank the Kenz car. 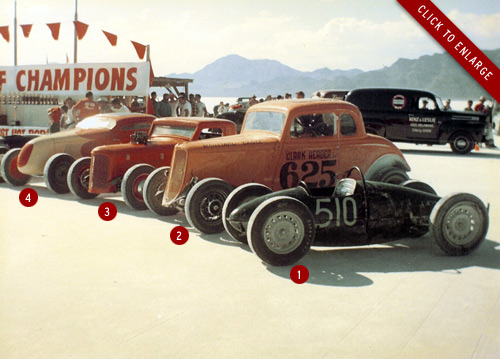 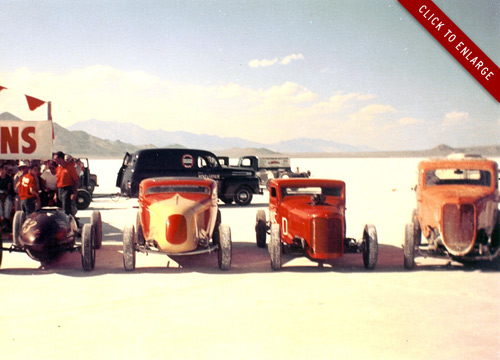 Same cars, different angle. The only addition is the Earl Evans lakester on the far left. 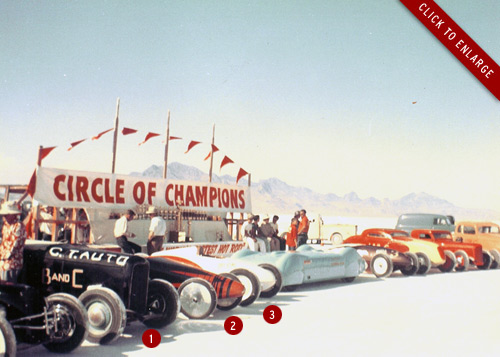 From the other side... (1) The Don Clark and Clem Tebow class 'C' roadster ran 162.46 mph. Their success with an Ardun overhead conversion changed a lot of minds in 1951. The following year, there would be many more examples of the Ardun equipped flathead. (2) Ak Miller's '27 T featured a rear mounted flathead and ran 161.87 to take the class 'C' modified roadster class. (3) The So-Cal lakester did not go home without a trophy. 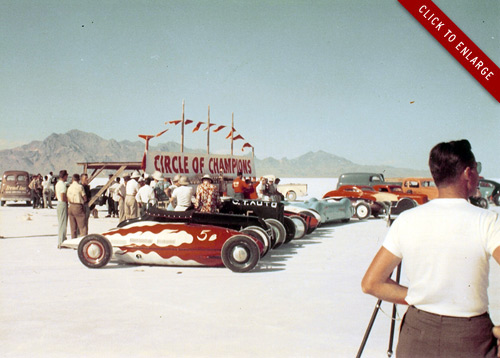 A little wider angle shot and we get our last look at Ray's lakester. The week started out rough for Ray's team as they lost a motor. At the same time, Clyde Sturdy wasn't having much luck running competitively in his heavy street roadster even though he had a hot flathead mill. A deal was done and Clyde's motor went into the streamliner. It was enough to take the class 'B' lakester record with a 166.77 mph average.

As amazing as these photos are, the Bob Roddick story does not end here. I had been working on the research for this article for about a week or so when I got yet another email from Dave. Gwynn (Dave’s wife and Bob’s daughter) had been cleaning out some of Bob’s things when she found yet another batch of unprocessed film. Next week we will get into those photos as well as learn a little bit more about the man behind the camera.

Until then, I hope you fellas enjoy studying these photos as much as I have. This has been and will continue to be one hell of a ride.