The Hot Rod Cinematic – It’s Over…

Posted by Ryan on July 2, 2007 and filed under: Event Coverage, Feature Articles 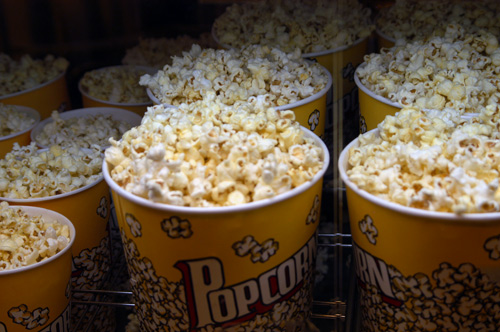 We are just outside Memphis, TN and Silva is driving. Merle is pouring “Mama Tried” out the radio speakers. The Hot Rod Cinematic is done and I’m sitting here thinking back about the experience.

It was one hell of a time and one of the best first year events we’ve ever done. Folks showed up from Illinois, Louisiana, Wisconsin, Pennsylvania, Florida, Kentucky, Ohio, West Virginia, Indiana, Michigan, Arkansas, and Texas (76 cars total) to watch “Rebel Without A Cause” the way it was supposed to be watched – at the drive-in.

Of course, the weekend started with a car show and as expected, this bunch rolled out some nice stuff. Typically, The Jalopy Journal isn’t into trophies but we felt it was appropriate to hand out a “Best of Show” award. The hand-lettered trophy (big props to oldbobsign) went to Don’s “Lazy-8” roadster – an original hot rod with tons of history and perfection on its side. More than a few of us fell in love instantly. 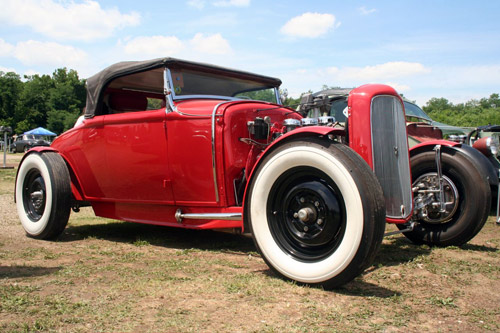 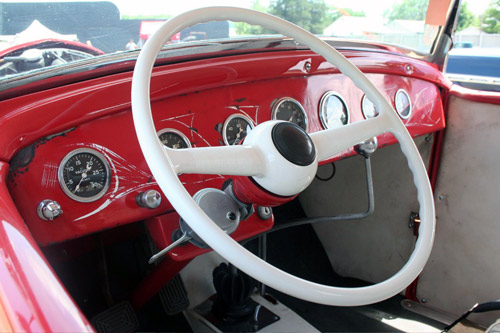 Caption: The interior was just as original and full of personality.

However, the “Lazy-8” wasn’t the only showstopper. Ken’s Caddy sporting a fresh Fat Lucky interior was incredible, Doc’s ’33 Ford (ahhh… WOW) and ’55 Chevy duo were absolutely breath taking, Larry’s blue roadster hit the traditional nail, PeteJoe’s a-truck suited me perfectly, Bob’s custom Vette ruled, Lady’s Lincoln and… this list could really go on for pages. It was just really refreshing to see some east coast cars in the flesh for once.

After the day show, we cruised out to the Gallipolis town square on the river, grabbed some dinner, and prepared ourselves for the payoff – the movie. But first we held the Coker “Drive-In” Challenge. Charles Brewer squeezed 39 toddlers, kids, women, children, and fat men into his Chevrolet milk truck (despite our lovely judges’ best attempts to thwart) to take home a brand new set of Coker Tires donated by Corky himself. Hilarity ensued and shortly after, the movie did as well. 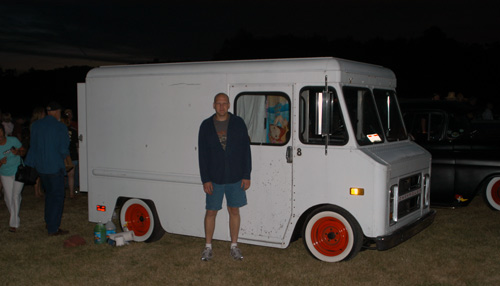 Caption: Charles won a brand new set of Coker tires and folks had a ball trying to beat him and his rather large milk truck.

This was something I had always wanted to experience and it was really the primary purpose of this first Cinematic show for me. The saturated colors of the old 35mm film bounced off of the lines of the cars just how I had imagined and the sounds squeaked out of the old speaker boxes just like they had 50 years ago. To see it written in words makes the scene feel like a cheesy 1950’s pop-culture exaggeration. However, it was far from that… It was magical and something I will never forget. 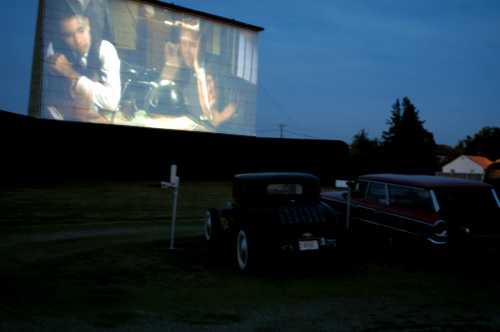 It was also an experience I could have never had if it wasn’t for all of the folks that bombed out to Gallipolis in their hot rods and customs. Thank you all for making the first year a good one… We are already working on plans to make next year bigger and better. 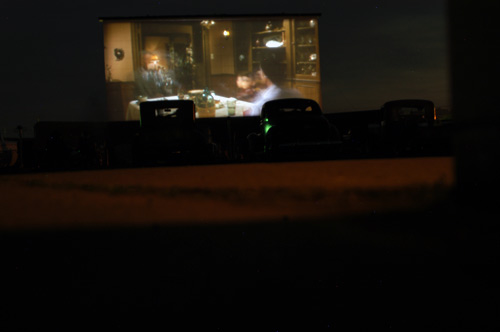 Special Thanks:
1. Kevin and Jill Silva. Without these two, we would have all been screwed. Pals.
2. Larry for his incredible lettering job after a full day’s work.
3. Bob and Maggie for getting us hooked up with hotel rooms.
4. Jeff Norwell for some of my all time favorite event art.
5. Coker Tires for supporting the show and sponsoring the Coker “Drive-In” Challenge.
6. A little girl named Casey for helping me realize what matters.
7. All the folks at the Kanauga Drive-In.
*8. Marcie for putting the whole damn thing together.